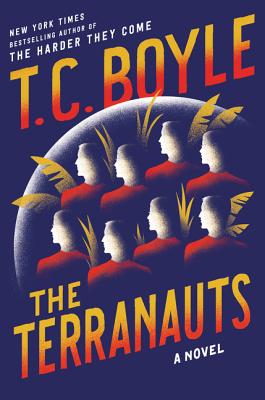 “In the early 1990s, a grand experiment began in the Arizona desert to determine if human life could be sustained in an engineered, sealed ecological system. The mission failed spectacularly, but fiction gives it another chance in this riveting story of eight scientists who commit to live under glass for two years. They battle hunger, fatigue, and isolation, but the real drama is personal. The story is told through the voices of three distinct narrators - two heating things up on the inside and one nursing resentments outside the glass walls. Master storyteller Boyle entertains, but never slips into schlock. He writes with wit and perspicacity on both human relations and ecology, and this novel is among his best.”
— Sharon Flesher (W), Brilliant Books, Suttons Bay, MI
View the List

A deep-dive into human behavior in an epic story of science, society, sex, and survival, from one of the greatest American novelists today, T. C. Boyle, the acclaimed, bestselling, author of the PEN/ Faulkner Award–winning World’s End and The Harder They Come.

It is 1994, and in the desert near Tillman, Arizona, forty miles from Tucson, a grand experiment involving the future of humanity is underway. As climate change threatens the earth, eight scientists, four men and four women dubbed the "Terranauts," have been selected to live under glass in E2, a prototype of a possible off-earth colony. Their sealed, three-acre compound comprises five biomes—rainforest, savanna, desert, ocean, and marsh—and enough wildlife, water, and vegetation to sustain them.

Closely monitored by an all-seeing Mission Control, this New Eden is the brainchild of ecovisionary Jeremiah Reed, aka G.C.—"God the Creator"—for whom the project is both an adventure in scientific discovery and a momentous publicity stunt. In addition to their roles as medics, farmers, biologists, and survivalists, his young, strapping Terranauts must impress watchful visitors and a skeptical media curious to see if E2’s environment will somehow be compromised, forcing the Ecosphere’s seal to be broken—and ending the mission in failure. As the Terranauts face increased scrutiny and a host of disasters, both natural and of their own making, their mantra: "Nothing in, nothing out," becomes a dangerously ferocious rallying cry.

Told through three distinct narrators—Dawn Chapman, the mission’s pretty, young ecologist; Linda Ryu, her bitter, scheming best friend passed over for E2; and Ramsay Roothorp, E2’s sexually irrepressible Wildman—The Terranauts brings to life an electrifying, pressured world in which connected lives are uncontrollably pushed to the breaking point. With characteristic humor and acerbic wit, T.C. Boyle indelibly inhabits the perspectives of the various players in this survivalist game, probing their motivations and illuminating their integrity and fragility to illustrate the inherent fallibility of human nature itself.


Praise For The Terranauts: A Novel…

“Boyle is a genius at capturing social microcosms and excavating emotions simmering beneath the surface of contemporary America...A gripping and revelatory tale.”
— BBC Between the Lines

“A virtuoso storyteller and a connoisseur of hubris, Boyle mesmerizes and provokes...Boyle is a literary star, and an all-points publicity campaign and author tour will launch this shrewd and irresistible novel of ambition and folly.”
— Booklist (starred review)

“This is one of Boyle’s best-and quite possibly one of the best of the year.”
— Library Journal (starred review)

“[A] preapocalyptic tale from a master of maximalism.”
— Esquire

T.C. Boyle has published fourteen novels and ten collections of short stories. He won the PEN/Faulkner award in 1988 for his novel World’s End, and the Prix Médicis étranger for The Tortilla Curtain in 1995, as well as the 2014 Henry David Thoreau award for excellence in nature writing. He is a Distinguished Professor of English at the University of Southern California and lives in Santa Barbara.