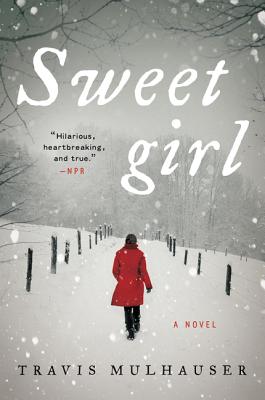 “When her addict mother goes missing, Percy James is determined to find her before a winter storm descends upon their rural Michigan town. When Percy arrives at the drug dealer's house, the smells and clutter don't surprise her, but the discovery of a screaming infant does. Percy grabs the child and sets out to find help for her, no matter what the cost. Determined to save this little girl, Percy takes risks she never thought she could assume, and through the journey she finds she can save herself as well. Fans of Ron Rash will fall in love with Percy in Mulhauser's debut!”
— Teresa Steele (E), Old Firehouse Books, Fort Collins, CO
View the List

With the heart, daring, and evocative atmosphere of Winter’s Bone and True Grit, and driven by the raw, whip-smart voice of Percy James, a blistering debut about a fearless sixteen-year old girl whose search for her missing mother leads to an unexpected discovery, and a life or death struggle in the harsh frozen landscape of the Upper Midwest.

As a blizzard bears down, Percy James sets off to find her troubled mother, Carletta. For years, Percy has had to take care of herself and Mama—a woman who’s been unraveling for as long as her daughter can remember. Fearing Carletta is strung out on meth and that she won’t survive the storm, Percy heads for Shelton Potter’s cabin, deep in the woods of Northern Michigan. A two-bit criminal, as incompetent as he his violent, Shelton has been smoking his own cook and grieving the death of his beloved Labrador, Old Bo.

But when Percy arrives, there is no sign of Carletta. Searching the house, she finds Shelton and his girlfriend drugged into oblivion—and a crying baby girl left alone in a freezing room upstairs. From the moment the baby wraps a tiny hand around her finger, Percy knows she must save her—a split-second decision that is the beginning of a dangerous odyssey in which she must battle the elements and evade Shelton and a small band of desperate criminals, hell-bent on getting that baby back.

Knowing she and the child cannot make it alone, Percy seeks help from Carletta’s ex, Portis Dale, who is the closest thing she’s ever had to a father. As the storm breaks and violence erupts, Percy will be forced to confront the haunting nature of her mother’s affliction and finds her own fate tied more and more inextricably to the baby she is determined to save.

Filled with the sweeping sense of cultural and geographic isolation of its setting—the hills of fictional Cutler County in northern Michigan—and told in Percy’s unflinching style, Sweetgirl is an affecting exploration of courage, sacrifice, and the ties that bind—a taut and darkly humorous tour-de-force that is horrifying, tender, and hopeful.


Praise For Sweetgirl: A Novel…

” A riveting novel... far, far funnier than it has any right to be. If you’re a fan of Charles Portis and Denis Johnson--and if you’re not, then you should be--then this is book is exactly what you’ve been wanting, what you’ve been waiting for.”
— Brock Clarke, author of The Happiest People in the World

“[Sweetgirl is] filled with true wit, cunning, and the unwanted wisdom of a child denied a childhood. This novel comes on like the blizzard at its center, and leaves you dazzled and dazed not only by how much Travis Mulhauser knows, but how deeply he cares.”
— Michael Parker, author of All I Have in this World

“There’s a big old neon heart pulsing on every page of Sweetgirl, like the sign to a bar you can’t help but enter. I felt thrilled and shocked, and I couldn’t stop turning the pages. Travis Mulhauser is a writer to be reckoned with.”
— Lindsay Hunter, author of Ugly Girls and Don't Kiss Me

“Sweetgirl is a gritty, compelling novel of a world where even a sixteen-year-old must confront what Edith Wharton called ‘the hard considerations of the poor.’ Mulhauser depicts his people and their landscape with uncompromising fidelity.”
— Ron Rash

“[A] compulsively readable novel...finish the first chapter and you will be hooked...violent, dark, and impressively redemptive... Sweetgirl is a upper-Midwestern homage to great American quest novels like True Grit and Winter’s Bone. It is a truly memorable and remarkable read.”
— Nickolas Butler, author of Shotgun Lovesongs

“The perfect balance of humor and heartache... a masterful debut... as wise as it is suspenseful, as funny as it is tragic... written with guts, grit, and grace, Sweetgirl is the book you want to keep you company on a cold winter’s night.”
— Ploughshares, Best Books of the New Year

“Sweetgirl works on so many levels, it’s difficult to know how to classify it... hilarious, heartbreaking and true, a major accomplishment from an author who looks certain to have an impressive career ahead of him.”
— NPR

A lean gutpunch of a novel surfaced from Cutler County this month, and its name is Sweetgirl—a lyrical tale that practically demands to be read in a single sitting.
— Paste Magazine

“Mulhauser has created a suspenseful tale of sadness and redemption.”
— Herald-Sun (Durham, NC)

“So good that I read a few paragraphs aloud to my podiatrist... “Sweetgirl,” by Travis Mulhauser of Durham. Though meth and drugs infest almost every page, this debut novel is chillingly lyrical and filled with a love so raw and fierce it takes your breath.”
— Charlotte Observer

“Though the story takes place in a chaotic Michigan blizzard, fans of Ozark-based grit lit will feel right at home in Travis Mulhauser’s gorgeous, lyrical Sweetgirl... With characters that toe the line between doom and hope, Sweetgirl delivers compelling, emotional resonance.”
— Paste Magazine

“[Y]ou can’t help but smile at this disarmingly original novel... Travis Mulhauser traverses a wobbling slack line across a moral crevasse that few of us will experience. Yet there’s a devastating credibility to the events he creates.”
— Minneapolis Star Tribune

“The writing is gorgeous and the stakes rise steadily from the moment Percy first sets out, making this slim novel surprisingly vicious and taut.”
— Bookriot.com

Travis Mulhauser is from Petoskey, Michigan. He currently lives in Durham, North Carolina, with his wife and two children.