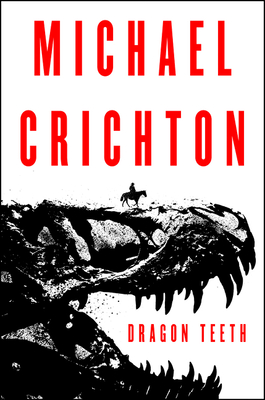 “I worshipped Michael Crichton. I cried for two days when he died, in part because there would be no more novels. However, after all these years, Dragon Teeth is a true surprise, and a joyful one indeed! Although he's more associated with futuristic science, Mr. Crichton was a dab hand at the historic thriller, and this novel is deeply grounded in fact. At its heart are two feuding paleontologists, Edward Drinker Cope and Othniel Marsh, participants in the late-1800s Bone Wars, a period of frenzied fossil discovery. Add to the mix a fictional Yale student, friendly and unfriendly Native Americans, a heap of varmints and scoundrels, and a lady or two, and you've got a rollicking good story!”
— Susan Tunis (E), Bookshop West Portal, San Francisco, CA
View the List

Michael Crichton, the #1 New York Times bestselling author of Jurassic Park, returns to the world of paleontology in this recently discovered novel—a thrilling adventure set in the Wild West during the golden age of fossil hunting.

The year is 1876. Warring Indian tribes still populate America’s western territories even as lawless gold-rush towns begin to mark the landscape. In much of the country it is still illegal to espouse evolution. Against this backdrop two monomaniacal paleontologists pillage the Wild West, hunting for dinosaur fossils, while surveilling, deceiving and sabotaging each other in a rivalry that will come to be known as the Bone Wars.

Into this treacherous territory plunges the arrogant and entitled William Johnson, a Yale student with more privilege than sense. Determined to survive a summer in the west to win a bet against his arch-rival, William has joined world-renowned paleontologist Othniel Charles Marsh on his latest expedition.  But when the paranoid and secretive Marsh becomes convinced that William is spying for his nemesis, Edwin Drinker Cope, he abandons him in Cheyenne, Wyoming, a locus of crime and vice. William is forced to join forces with Cope and soon stumbles upon a discovery of historic proportions.  With this extraordinary treasure, however, comes exceptional danger, and William’s newfound resilience will be tested in his struggle to protect his cache, which pits him against some of the West’s most notorious characters.

A page-turner that draws on both meticulously researched history and an exuberant imagination, Dragon Teeth is based on the rivalry between real-life paleontologists Cope and Marsh; in William Johnson readers will find an inspiring hero only Michael Crichton could have imagined. Perfectly paced and brilliantly plotted, this enormously winning adventure is destined to become another Crichton classic.


Praise For Dragon Teeth: A Novel…

“Among all Crichton’s novels, it’s one of his best, a beautifully detailed, scientifically engrossing, absolutely riveting story.”
— Booklist, starred review

“A totally unexpected flashback to the days when Crichton was central to the entertainment world.... If you like a good Crichton paleo-action story incorporating real historical figures, you’ll like this one.”
— New York Times

“A fast-paced page-turner that showcases Crichton’s singular ability to combine action, science, and history into one fantastic story. Fans will be thrilled, while new readers will discover what makes his books so enthralling.”
— Library Journal

“A lean, propulsively readable adventure story, filled with seamlessly interwoven exposition and sharp dialogue. It’s easily the best thing with Michael Crichton’s name on it since 1999’s Timeline.... Linking the word ‘dinosaur’ and the name ‘Michael Crichton’ is about as sure-fire a recipe for magic as the modern publishing world can muster.”
— Christian Science Monitor

“Dragon Teeth is an effective, page-turning combination of historical fact and fast-paced fiction.... A distinct pleasure to read.... [Readers will] be anxious to know if there might be more unpublished treasures waiting in the Crichton Archives to be excavated and brought forward for our reading delight.”
— New York Journal of Books

“On display... are [Crichton’s] many gifts as a popular novelist and Dragon Teeth is a gripping and entertaining read.”
— Sunday Times

“Any new Crichton novel is a cause for celebration.”
— Pittsburgh Post-Gazette

“<i>Dragon Teeth</i> is history class made palatable thanks to thrilling storytelling.... Why wait for the TV adaptation when this terrific book is already on the shelves?”
— Fort Worth Star Telegram

“A good story with a compelling plot and plenty of twists and turns to keep the reader guessing.”
— Oklahoma City Oklahoman

“The book is packed with action, combining impeccable research and storytelling to offer an unforgettable excursion into classic Crichton territory.”
— Raleigh News & Observer

“Both thrilling and thought-provoking.”
— BookPage

“A terrific novelist. . . . He could make most readers lose sleep all night and call in sick the next day.”
— San Francisco Chronicle

Michael Crichton (1942-2008) was the author of the bestselling novels The Terminal Man, The Great Train Robbery, Jurassic Park, Sphere, Disclosure, Prey, State of Fear, Next and Dragon Teeth, among many others. His books have sold more than 200 million copies worldwide, have been translated into forty languages, and have provided the basis for fifteen feature films. He wrote and directed Westworld, The Great Train Robbery, Runaway, Looker, Coma and created the hit television series ER. Crichton remains the only writer to have a number one book, movie, and TV show in the same year.

Daniel H. Wilson is a Cherokee citizen and author of the New York Times bestselling Robopocalypse and its sequel Robogenesis, as well as ten other books. He recently wrote the Earth 2: Society comic book series for DC Comics. Wilson earned a PhD in Robotics from Carnegie Mellon University, as well as master’s degrees in Artificial Intelligence and Robotics. He has published over a dozen scientific papers and holds four patents. Wilson lives in Portland, Oregon.