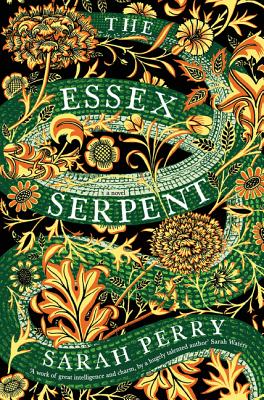 "A novel of almost insolent ambition--lush and fantastical, a wild Eden behind a garden gate...it's part ghost story and part natural history lesson, part romance and part feminist parable. I found it so transporting that 48 hours after completing it, I was still resentful to be back home."  -New York Times

“An irresistible new novel…the most delightful heroine since Elizabeth Bennet in Pride and Prejudice…By the end, The Essex Serpent identifies a mystery far greater than some creature ‘from the illuminated margins of a manuscript’: friendship.”  -Washington Post

"Richly enjoyable... Ms. Perry writes beautifully and sometimes agreeably sharply... The Essex Serpent is a wonderfully satisfying novel. Ford Madox Ford thought the glory of the novel was its ability to make the reader think and feel at the same time. This one does just that." -Wall Street Journal

When Cora Seaborne’s brilliant, domineering husband dies, she steps into her new life as a widow with as much relief as sadness: her marriage was not a happy one. Wed at nineteen, this woman of exceptional intelligence and curiosity was ill-suited for the role of society wife. Seeking refuge in fresh air and open space in the wake of the funeral, Cora leaves London for a visit to coastal Essex, accompanied by her inquisitive and obsessive eleven-year old son, Francis, and the boy’s nanny, Martha, her fiercely protective friend.

While admiring the sites, Cora learns of an intriguing rumor that has arisen further up the estuary, of a fearsome creature said to roam the marshes claiming human lives. After nearly 300 years, the mythical Essex Serpent is said to have returned, taking the life of a young man on New Year’s Eve. A keen amateur naturalist with no patience for religion or superstition, Cora is immediately enthralled, and certain that what the local people think is a magical sea beast may be a previously undiscovered species. Eager to investigate, she is introduced to local vicar William Ransome. Will, too, is suspicious of the rumors. But unlike Cora, this man of faith is convinced the rumors are caused by moral panic, a flight from true belief.

These seeming opposites who agree on nothing soon find themselves inexorably drawn together and torn apart—an intense relationship that will change both of their lives in ways entirely unexpected.

Hailed by Sarah Waters as "a work of great intelligence and charm, by a hugely talented author," The Essex Serpent is "irresistible . . . you can feel the influences of Mary Shelley, Bram Stoker, Wilkie Collins, Charles Dickens, and Hilary Mantel channeled by Perry in some sort of Victorian séance. This is the best new novel I’ve read in years" (Daily Telegraph).


Praise For The Essex Serpent: A Novel…

“A novel of almost insolent ambition--lush and fantastical, a wild Eden behind a garden gate...it’s part ghost story and part natural history lesson, part romance and part feminist parable. I found it so transporting that 48 hours after completing it, I was still resentful to be back home.”
— New York Times

“An irresistible new novel…the most delightful heroine since Elizabeth Bennet in Pride and Prejudice…By the end, The Essex Serpent identifies a mystery far greater than some creature ‘from the illuminated margins of a manuscript’: friendship.”
— Washington Post

“Richly enjoyable... Ms. Perry writes beautifully and sometimes agreeably sharply... The Essex Serpent is a wonderfully satisfying novel. Ford Madox Ford thought the glory of the novel was its ability to make the reader think and feel at the same time. This one does just that.”
— Wall Street Journal

“A fabulous summer read...If Middlemarch heroine Dorothea Brooke had heard of dinosaurs, she might have gone tromping through the salt marshes with Cora Seaborne.”
— Christian Science Monitor

“The sumptuous twists and turns of Perry’s prose invite close reading, as deep and strange and full of narrative magic as the Blackwater itself. Stuffed with smarts and storytelling sorcery, this is a work of astonishing breadth and brilliance.”
— Kirkus Reviews (starred review)

“The vivid, often frightening imagery… and the lush descriptions… create a magical background for the sensual love story between Sarah and Will. Book-discussion groups will have a field day with the imagery, the well-developed characters, and the concepts of innocence, evil, and guilt.”
— Booklist (starred review)

“In Perry’s excellent second novel… a fatal illness, a knife-wielding maniac, and a fated union with the Essex Serpent will dictate the ultimate happiness of [the] characters. Like John Fowles’s The French Lieutenant’s Woman... this is another period literary pastiche with a contemporary overlay.”
— Publishers Weekly

“Compulsive...narrative and voice coil together until it is very difficult to stop reading.”
— The Guardian

“Irresistible”
— People (Book of the Week)

“Astonishing...Perry’s prose is rich, textured, and intricate...a thoughtful and elegant book about the human need for knowledge and love, and about the fears and desires we bury.”
— Vox

“Triumphs on every level, whether in its rich, evocative prose or its authentic Victorian detail, its credible, multifaceted characters or its high-stakes drama...Perry likened writing her novel to a ‘possession.’ Reading it, we find ourselves under a similar mesmerizing spell.”
— Minneapolis Star Tribune

“The Essex Serpent is Sarah Perry’s first book to come across the pond to us from Great Britain, and it is a corker...Even the most minor characters are filled with a particular life, light and love...one of the best, most memorable novels I have read in long years.”
— Daily Herald

“As engrossing as its reputation would suggest...Perry’s command of language as a tool to evoke time and place proves remarkable.”
— Paste Magazine

“A work of great intelligence and charm, by a hugely talented author.”
— Sarah Waters, author of Fingersmith

“Dickensian in scope, depth, and exquisite use of language … At once love story and mystery, deeply penetrating layered characters with wit and grace, The Essex Serpent reveals the mundane beast that spawned wild rumors, and the stranger, less easily unmasked beasts within us.”
— Historical Novels Review

“At once numinous, intimate and wise, The Essex Serpent is a marvellous novel about the workings of life, love and belief, about science and religion, secrets, mysteries, and the complicated and unexpected shifts of the human heart…It is so good its pages seem lit from within.”
— Helen Macdonald, author of H is for Hawk

“[T]he most deeply satisfying fiction you will read this year.”
— Waterstones Book of the Year

“A blissful novel of unapologetic appetites, where desire and faith mingle on the marshes, but friendship is the miracle. Sarah Perry has the rare gift of committing the uncommittable to prose -- that is to say: here is a writer who understands life.”
— Jessie Burton, author of The Miniaturist

“A big, warm, generous novel that wears its considerable wisdom lightly, The Essex Serpent is an absolute pleasure from start to finish—I truly didn’t want it to end.”
— Melissa Harrison, author of At Hawthorn Time

“For originality, richness of prose and depth of characterization is unlikely to be bettered this year ... one of the most memorable historical novels of the past decade.”
— Sunday Times

“Confident, intelligent and original storytelling -- I was seduced by the many charms of The Essex Serpent.”
— Laline Paull, author of The Bees

“Had Charles Dickens and Bram Stoker come together to write the great Victorian novel, I wonder if it would have surpassed The Essex Serpent? Sarah Perry establishes herself as one of the finest fiction writers working in Britain today.”
— John Burnside

“A suspenseful love story… The Essex Serpent recalls variously the earthiness of Emily Brontë, the arch, high-tensile tone of Conan Doyle, the evocation of time and place achieved by Hilary Mantel and Sarah Waters and the antiquarian edgelands horror of M. R. James.”
— New Statesman

“Perry’s achieved the near impossible…A thing of beauty inside and out… a stunning achievement.”
— The Independent

“Irresistible... you can feel the influences of Mary Shelley, Bram Stoker, Wilkie Collins, Charles Dickens and Hilary Mantel channeled by Perry in some sort of Victorian séance. This is the best new novel I’ve read in years.”
— Daily Telegraph

“An exquisitely absorbing, old-fashioned page-turner…The Essex Serpent is shot through with such a vivid, lively sense of the period that it reads like Charles Dickens at his most accessible and fans of Jonathan Strange & Mr. Norrell will also find much to love.”
— Daily Express

“Perry fully inhabits many of the concerns and stylistic elements of the 19th century novel -- but its interests are still contemporary ones: desire, fulfillment and questioning the world… Her language is exquisite, her characterization finely tuned… [I]t’s clear that Perry is a gifted writer of immense ability.”
— Irish Times

“A Victorian-era gothic with a Dickensian focus on societal ills, Perry’s second novel surprises in its wonderful freshness . . . [her] singular characters are drawn with a fondness that is both palpable and contagious, all making for pure pleasure.”
— The Observer

“Sarah Perry’s novel of 19th century England tackles big ideas...reversals and sharp darts of psychological insight combined with a sense of the substance and feeling of late 19th-century ideas in bloom make this a fine novel, both historical and otherwise.”
— Newsday

Sarah Perry is the internationally bestselling author of The Essex Serpent and After Me Comes the Flood. She lives in England.