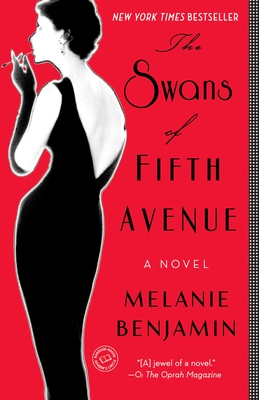 The Swans of Fifth Avenue

“Are you interested in the lifestyles of the rich and famous? Arrange your hair and makeup, darlings, and get ready to dish about the dirty little secrets in 1950s high society. Truman Capote collected 'swans' -- rich and glamorous women who floated through life pampered and indulged. This fictionalized account of the meteoric rise and very public fall of Capote, entwined with his deep friendship with Babe Paley and his ultimate betrayal of her and the rest of the swans, will slake your thirst for gossipy, breezy, scandalous details. Take off your wrap, pour a highball, and enjoy!”
— Cindy Pauldine (W), The River's End Bookstore, Oswego, NY
View the List

NEW YORK TIMES BESTSELLER • The author of The Aviator’s Wife returns with a triumphant new novel about New York’s “Swans” of the 1950s—and the scandalous, headline-making, and enthralling friendship between literary legend Truman Capote and peerless socialite Babe Paley.

Of all the glamorous stars of New York high society, none blazes brighter than Babe Paley. Her flawless face regularly graces the pages of Vogue, and she is celebrated and adored for her ineffable style and exquisite taste, especially among her friends—the alluring socialite Swans Slim Keith, C. Z. Guest, Gloria Guinness, and Pamela Churchill. By all appearances, Babe has it all: money, beauty, glamour, jewels, influential friends, a prestigious husband, and gorgeous homes. But beneath this elegantly composed exterior dwells a passionate woman—a woman desperately longing for true love and connection.

Enter Truman Capote. This diminutive golden-haired genius with a larger-than-life personality explodes onto the scene, setting Babe and her circle of Swans aflutter. Through Babe, Truman gains an unlikely entrée into the enviable lives of Manhattan’s elite, along with unparalleled access to the scandal and gossip of Babe’s powerful circle. Sure of the loyalty of the man she calls “True Heart,” Babe never imagines the destruction Truman will leave in his wake. But once a storyteller, always a storyteller—even when the stories aren’t his to tell.

Truman’s fame is at its peak when such notable celebrities as Frank and Mia Sinatra, Lauren Bacall, and Rose Kennedy converge on his glittering Black and White Ball. But all too soon, he’ll ignite a literary scandal whose repercussions echo through the years. The Swans of Fifth Avenue will seduce and startle readers as it opens the door onto one of America’s most sumptuous eras.

Praise for The Swans of Fifth Avenue

“This moving fictionalization brings the whole cast of characters back to vivid life. Gossipy and fun, it’s also a nuanced look at the beauty and cruelty of a rarefied, bygone world.”—People

“The era and the sordid details come back to life in this jewel of a novel.”—O: The Oprah Magazine

Praise For The Swans of Fifth Avenue: A Novel…

“This moving fictionalization brings the whole cast of characters back to vivid life. Gossipy and fun, it’s also a nuanced look at the beauty and cruelty of a rarefied, bygone world.”—People

“The era and the sordid details come back to life in this jewel of a novel.”—O: The Oprah Magazine

“[Captures] the mesmerizing sparkle and scandal of New York high society in the 1950s.”—Chicago Tribune

“Tantalizing . . . Readers will fall into a world of glitz, glamour and the exciting life of the rich and famous. The details and conversations are so rich, you may forget you're reading a novel.”—Associated Press

“Take Gossip Girl and move it to the 50s.”—theSkimm

“[Melanie] Benjamin has given us a compelling look at an American icon, a talented yet vulnerable man, and the complex woman he loved in his own distinctive way.”—The Philadelphia Inquirer

“The strange and fascinating relationship between Truman Capote and his ‘swans’ is wonderfully reimagined in this engrossing novel. It’s a credit to Benjamin that we end up caring so much for these women of power, grace, and beauty—and for Capote, too.”—Sara Gruen, New York Times bestselling author of Water for Elephants

“A delicious tale . . . Melanie Benjamin has turned Truman Capote’s greatest scandal into your next must-read book-club selection.”—Jamie Ford, New York Times bestselling author of Hotel on the Corner of Bitter and Sweet

“Reading The Swans of Fifth Avenue is like being ushered into a party where you’re offered champagne and fed the sumptuous secrets of New York’s elite—without having to pay the price afterward. The swans are outmatched only by the elegance of Melanie Benjamin’s prose—captivatingly earnest and sophisticated.”—Vanessa Diffenbaugh, New York Times bestselling author of The Language of Flowers

“The beautiful people of the fifties and sixties glitter in this riveting tale of betrayal and greed. . . . Irresistible, astonishing, and told with verve . . . not to be missed.”—Lynn Cullen, bestselling author of Mrs. Poe

Melanie Benjamin is the New York Times bestselling author of The Aviator’s Wife, The Autobiography of Mrs. Tom Thumb, and Alice I Have Been. Benjamin lives in Chicago, where she is at work on her next historical novel.
Loading...
or support indie stores by buying on