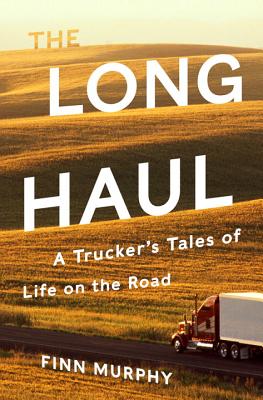 A Trucker's Tales of Life on the Road

“This memoir of a life spent driving trucks full of strangers' personal belongings across the country is the book I didn't know I needed. Finn Murphy writes engaging slice-of-life stories about his time as a long-haul truck driver while also showing the changes in the trucking industry and American life in the decades he's spent pulling thousands of pounds up mountains, through storms, and across plains. Trucking is a solitary life, but Murphy grabbed me like a friend and took me with him on his journey.”
— Jamie Thomas (E), Women & Children First, Chicago, IL
View the List

“A thoroughly enjoyable memoir of the romance and reality of a life on the road—specifically, a long-haul mover, or ‘bedbugger,’ in the terms of the trade—that manages to be as wise about class and culture in modern America as any academic treatise.”
— Tom Nissley, Phinney Books, Seattle, WA
View the List

A long-haul mover’s rollicking account of life out on the Big Slab.

More than thirty years ago, Finn Murphy dropped out of college to become a long-haul trucker. Since then he’s covered more than a million miles packing, loading, and hauling people’s belongings all over America. Known by his trucker handle as U-Turn, he spends his days (and many of his nights) in a 53-foot eighteen-wheeler he calls Cassidy.

In The Long Haul, Murphy offers a trucker’s-eye view of America on the move. Going far beyond the myth of the American road trip, he whisks readers down the I-95 Powerlane, across the Florida Everglades, in and out of the truck stops of the Midwest, and through the steep grades of the Rocky Mountains. As he crisscrosses the country, Murphy recounts with wit, candor, and charm the America he has seen change over the decades, from the hollowing-out of small towns to changing tastes in culture and home furnishings.

Some 40 million Americans move each year, and very few have any idea what they’re getting into or the kind of person to whom they are relinquishing their worldly goods. The Long Haul is also a behind-the-scenes look at the moving industry, revealing what really happens when we call in “the movers.”

Through it all, Murphy tells poignant, funny, and often haunting stories of the people he encounters on the job: a feisty hoarder in New Hampshire; a Virginia homeowner raging when Murphy’s truck accidentally runs down a stand of trees; an ex-banker in Colorado who treats Finn and his crew with undisguised contempt; a widow who needs Murphy to bring her archeologist husband’s remains and relics to a Navajo burial ceremony in New Mexico. These experiences inspire Finn’s memorable reflections on work, class, and the bonds we form with the things we own and the places we live.

Brimming with personality and filled with great characters, The Long Haul is a resonant portrait of the enduring appeal of manual labor in the dark underbelly of the American Dream.

Praise For The Long Haul: A Trucker's Tales of Life on the Road…

Like priests, movers shepherd us through life’s transitions; like cowboys, truckers drive the roads we’ll never know. Both see America in ways the rest of us don’t. In The Long Haul, Murphy . . . bring[s] us into his semi-mythic world.

It’s [Murphy's] rich perspective as a mover that makes this story of trucking life so insightful. . . . A well-written story that rarely slows down.
— Nathan Deuel - Los Angeles Times

The Long Haul delivers because it is a survey of a culture fused to a working man’s memoir—and Murphy, smartly, avoids sentiment and lazy comparisons.

A veteran driver’s informative, humorous and beautifully detailed memoir. . . . It’s a hoot to ride along with Murphy.
— Irene Wanner - The Seattle Times

There's nothing semi about Finn Murphy's trucking tales of The Long Haul.

Finn Murphy . . . bring[s] readers along for a rollicking ride through a trucker's world and [provides] an insider's eye, pairing it with an involving series of encounters.
— The Midwest Book Review

A rare, fascinating glimpse into the lives of big-rig pilots and the people they move… The Long Haul beguil[es] readers with wit, wisdom and observations born from decades in transit.

Finn Murphy grew up in Connecticut and now lives in Colorado. He started working as a long-haul trucker in 1980. The Long Haul is his first book.