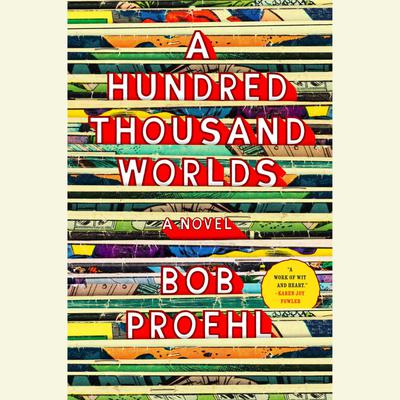 “Nine-year-old Alex and his mom Valerie - the ex-star of a superhero TV show -- make their way across the country, Comic-Con by Comic-Con, toward a future of inevitable loss. They visit the fallen heroes, wise women, and wizards of pen-and-ink who have all shaped the story of their lives. Pushed and pulled by so many other people's stories, can Alex and Valerie learn to write their own?”
— Cat Nichols (E), Bookshop Santa Cruz, Santa Cruz, CA
View the List

“A Kavalier & Clay for the Comic-Con Age, this is a bighearted, inventive, exuberant debut.” —Eleanor Henderson, author of Ten Thousand Saints

Valerie Torrey took her son, Alex, and fled Los Angeles six years ago—leaving both her role on a cult sci-fi TV show and her costar husband after a tragedy blew their small family apart. Now Val must reunite nine-year-old Alex with his estranged father, so they set out on a road trip from New York, Val making appearances at comic book conventions along the way.

As they travel west, encountering superheroes, monsters, time travelers, and robots, Val and Alex are drawn into the orbit of the comic-con regulars, from a hapless twentysomething illustrator to a brilliant corporate comics writer stuggling with her industry's old-school ways to a group of cosplay women who provide a chorus of knowing commentary. For Alex, this world is a magical place where fiction becomes reality, but as they get closer to their destination, he begins to realize that the story his mother is telling him about their journey might have a very different ending than he imagined.

A knowing and affectionate portrait of the geeky pleasures of fandom, A Hundred Thousand Worlds is also a tribute to the fierce and complicated love between a mother and son—and to the way the stories we create come to shape us.

Bob Proehl grew up in Buffalo, New York, where his local comics shop was Queen City Bookstore. He has worked as a bookseller and programming director for Buffalo Street Books, a DJ, a record store owner, and a bartender. He was a 2012 New York Foundation for the Arts Fellow in Fiction and a 2013 resident at the Saltonstall Arts Colony. He has written for the 33⅓ book series and worked as a columnist and reviewer for the arts and culture site PopMatters.com. Proehl currently lives in Ithaca, New York, with his wife, stepson, and daughter.