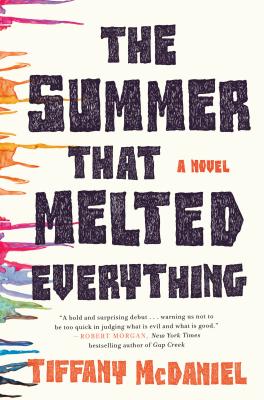 The Summer That Melted Everything

“There are hundreds of coming-of-age stories, but the one told in The Summer That Melted Everything is unique. In the summer of 1984, a series of disturbing events in Breathed, Ohio, are attributed to the arrival of a 13-year-old boy named Sal who claims to be the devil. Gossip and superstitions, exacerbated by the sweltering heat, turn the villagers against Sal. Only the family of the local prosecutor welcomes the boy, who is befriended by their son, Fielding. Through beautiful imagery and rich characters, McDaniel offers an original meditation on what is right and wrong, good and evil, in a magical, heart-wrenching, and unforgettable novel.”
— Pierre Camy (W), Schuler Books & Music, Grand Rapids, MI
View the List

The devil comes to Ohio in Tiffany McDaniel's breathtaking and heartbreaking literary debut novel, The Summer That Melted Everything.

“A wonderfully original, profoundly unsettling, deeply moving novel that delivers both the shock of fully realized reality and the deep resonance of parable...A remarkable debut.”
—Robert Olen Butler, Pulitzer Prize winning author of A Good Scent from a Strange Mountain

Fielding Bliss has never forgotten the summer of 1984: the year a heat wave scorched Breathed, Ohio. The year he became friends with the devil.

Sal seems to appear out of nowhere - a bruised and tattered thirteen-year-old boy claiming to be the devil himself answering an invitation. Fielding Bliss, the son of a local prosecutor, brings him home where he's welcomed into the Bliss family, assuming he's a runaway from a nearby farm town.

When word spreads that the devil has come to Breathed, not everyone is happy to welcome this self-proclaimed fallen angel. Murmurs follow him and tensions rise, along with the temperature as an unbearable heat wave rolls into town right along with him. As strange accidents start to occur, riled by the feverish heat, some in the town start to believe that Sal is exactly who he claims to be. While the Bliss family wrestle with their own personal demons, a fanatic drives the town to the brink of a catastrophe that will change this sleepy Ohio backwater forever.


Praise For The Summer That Melted Everything: A Novel…

WINNER OF THE GUARDIAN'S 2016 "NOT THE BOOKER" PRIZE

“The Summer that Melted Everything is inventive and provocative…a meaty and relentlessly good story.” —Bookreporter.com

“When word gets out that the devil may be in Breathed, tensions and temperatures will rise, and soon the town will find itself enveloped in full-blown hysteria. A fantastic Jackson-esque debut about rumors, fears, and beliefs.” —BookRiot

“This debut novel shines with beauty and lyricism. . . Give this to fans of atmospheric fiction, particularly those who enjoy the grit of Donald Ray Pollock, the foreshadowing of Shirley Jackson, and the mounting suspense of Peter Straub.” —Library Journal

“Tiffany McDaniel’s The Summer That Melted Everything is a wonderfully original, profoundly unsettling, deeply moving novel that delivers both the shock of fully realized reality and the deep resonance of parable. This is remarkable debut by a splendid young writer.”—Robert Olen Butler, Pulitzer Prize winning author of A Good Scent from a Strange Mountain

“In this bold and surprising debut novel, Tiffany McDaniel reveals a new voice in contemporary fiction. At times comic, at times heartbreaking, The Summer That Melted Everything, moves between the future and the past, and gives us a window on a particular time, the hell-hot summer of 1984, and a group of characters George Orwell could not have imagined. In this world nothing is quite what it seems, as mystery and revelation alternate, right up to the end. At times surreal, magical, this story of a family and community incorporates global warming, AIDS, discrimination, fear, mass hysteria, lynching, and martyrdom, but in the end is a love story, warning us not to be too quick in judging what is evil and what is good.” —Robert Morgan, New York Times bestselling author of Gap Creek

“Sometimes there is a novel so strange and beguiling it makes you give up your world for another world, all the while that you are reading it. Such a story is Tiffany McDaniel’s tale of an enchanted boy—who might be the devil—welcomed into a family with no right to their name, Bliss. It will frighten you, and charm you, and break your heart if you allow it . . . and you will allow it, because once this world has hold of you, it won’t let you go.” —Jacquelyn Mitchard, New York Times bestselling author The Deep End of the Ocean and Two if by Sea

“Tiffany McDaniel’s brilliant literary debut is a feast for the mind. Her gifted language and stunning story craft shine a bright light on human nature as she examines the face of good and evil. I enjoyed every single word.” —Susan Crandall, bestselling author of Whistling Past the Graveyard

“Sometimes a book comes along that is so good that it defies all descriptions, but I'll give it a shot anyway: Tiffany McDaniel's astounding and heartbreaking The Summer That Melted Everything reads as if Carson McCullers and Shirley Jackson got together with Nathaniel Hawthorne in some celestial backwater and decided to write the first truly great gothic coming-of-age novel of the twenty-first century. There, I said it. Now read it.” —Donald Ray Pollock, author of Knockemstiff and The Devil All the Time

“It is rare that a narrative makes me question my own beliefs. This book did that very thing. A fine story with a message about truth, trust, family, and the dangers of the devils among us.” – Suzanne Palmieri, author of The Witch of Bourbon Street

“The Summer That Melted Everything is a blast of hellfire, humor, and heartbreak that’s part Flannery O’Connor, part Stephen King, and wholly original.” —Lou Berney, author of The Long and Faraway Gone

“A wondrous debut of a novel. Imagine To Kill a Mockingbird, seen through the eyes of Neil Gaiman. McDaniel’s prose is rich and magical, full of passages of exquisite, strange beauty that ache with bitter truths and old sorrows. You'll not read anything else like it.” —James Sie, author of Still Life Las Vegas

Tiffany McDaniel is an Ohio native whose writing is inspired by the rolling hills and buckeye woods of the land she knows. She is the winner of The Guardian's 2016 "Not-the-Booker Prize" for her debut novel, The Summer that Melted Everything. The novel was also a Goodreads Choice Award double nominee in both fiction and debut categories, is a current nominee for the Lillian Smith Book Award, and has recently been announced as a finalist for the Ohioana Literary Award and the Women's Fiction Writers Association Star Award for Outstanding Debut.
Loading...
or
Not Currently Available for Direct Purchase