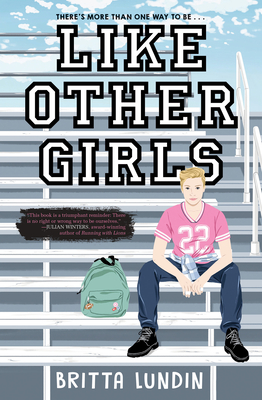 “What if I played football?” I ask. As soon as it’s out of my mouth, I feel stupid. Even suggesting it feels like I’ve overstepped some kind of invisible line we’ve all agreed not to discuss. We don’t talk about how Mara is different from other girls. We don’t talk about how Mara is gay but no one says so. But when I do stuff like this, I worry it gets harder for us all to ignore what’s right in front of us. I direct my gaze to Quinn. “What do you think?”“I think it’s frickin’ genius,” he says.
After getting kicked off the basketball team for a fight that was absolutely totally not her fault (okay maybe a little her fault), Mara is dying to find a new sport to play to prove to her coach that she can be a team player. A lifelong football fan, Mara decides to hit the gridiron with her brother, Noah, and best friend, Quinn—and she turns out to be a natural. But joining the team sets off a chain of events in her small Oregon town—and within her family—that she never could have predicted.Inspired by what they see as Mara’s political statement, four other girls join the team. Now Mara’s lumped in as one of the girls—one of the girls who can’t throw, can’t kick, and doesn’t know a fullback from a linebacker. Complicating matters is the fact that Valentina, Mara’s crush, is one of the new players, as is Carly, Mara’s nemesis—the girl Mara fought with when she was kicked off the basketball team. What results is a coming-of-age story that is at once tear-jerking and funny, thought-provoking and real, as Mara’s preconceived notions about gender, sports, sexuality, and friendship are turned upside down.
Britta Lundin's sophomore novel will give readers all the feels, and make them stand up and cheer.

"Like Other Girls boldly takes on the ultimate system of patriarchy--high school football---and spins a feminist revolution into a critique of the way women are pitted against each other and certain expressions of gender and femininity are valued over others. Britta Lundin has created a flawed, sharp, and absolutely magnificent roster of girls learning about themselves and each other, and how to treat both with more empathy and compassion. Like Other Girls encapsulates the claustrophobia of rural American life, the struggle to be true to yourself in spite of the external forces trying to define you, and the way none of us are ever as alone as we think. Britta Lundin is a force of nature, and a thrilling, honest advocate for not only being yourself, but letting others be theirs."—Mackenzi Lee, New York Times best-selling author of The Gentleman's Guide to Vice and Virtue


"Like Other Girls is the book you want to read right now: wildly absorbing and deeply warm-hearted. Lundin's writing is compassionate and nuanced, and her characters are distinctly, heartbreakingly teenaged. A perfect book for anyone who is trying to figure out how to grow up and into themselves."—Zan Romanoff, author of Look, an O Magazine "LGBTQ book that will change the literary landscape"


“Like Other Girls breaks all the rules in the best possibly ways! Britta Lundin navigates the complexities of identity, friendships, gender, sexuality, and finding your voice with the humor and thoughtfulness readers deserve. This book is a triumphant reminder: There is no right or wrong way to be ourselves.”—Julian Winters, award-winning author of Running With Lions


“Britta Lundin’s Like Other Girls doesn’t pull any punches—it is raw and angry and unapologetically queer.”—Ashley Poston, best-selling author of the Once Upon a Con series

Britt Lundin grew up in a small town in Oregon playing basketball, softball, and for two formative young years, flag football. She works as a TV writer on such shows as Riverdale and Betty. She is the author of the novel Ship It. She lives in Los Angeles with her wife and family. Follow her on Twitter @brittashipsit
Loading...
or support indie stores by buying on
(This book is on backorder)