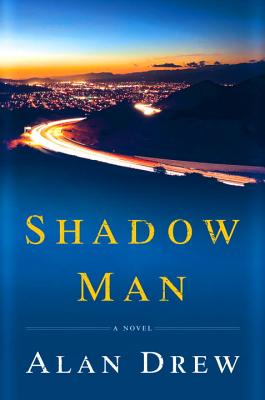 “Shadow Man is supposed to be the story of a serial killer who was horribly abused as a child and the efforts of the police to track him down and keep him from killing others. However, this book is really about Ben Wade, one of the detectives on the case. While the victims of the serial killer greatly affect Wade, who gives his all to catch him, it is the apparent suicide of a young teenager that really shakes up his world. Much more than just a search for a killer, Shadow Man is about living in the shadows of what happened in the past. Shadow Man could be called a thriller, but it is really much more than that, with characters that are so real you can feel their pain.”
— Nancy McFarlane (E), Fiction Addiction, Greenville, SC
View the List

A novel of psychological suspense about an idyllic community rocked by a serial killer—and a dark secret.

Detective Ben Wade has returned to his hometown of Rancho Santa Elena in search of a quieter life and to try to save his marriage. Suddenly the community, with its peaceful streets and excellent public schools, finds itself at the mercy of a serial killer who slips through windows and screen doors at night, shattering illusions of safety. As Ben and forensic specialist Natasha Betencourt struggle to stay one step ahead of the killer—and deal with painful episodes in the past—Ben’s own world is rocked again by violence. He must decide how far he is willing to go, and Natasha how much she is willing to risk, to protect their friendship and themselves to rescue the town from a psychotic murderer and a long-buried secret.

With fine, chilling prose, acclaimed author Alan Drew weaves richly imagined characters into the first of several thrilling novels of suspense featuring the California world of Ben Wade and Natasha Betencourt. Shadow Man reveals the treacherous underbelly of suburban life, as a man, a woman, a family, and a community are confronted with the heart of human darkness.

Finalist for the SCIBA T. Jefferson Parker Award • Named one of the Best Crime Novels of the Year by The Booklist Reader

“A stellar achievement, a book that unspools like a dark-toned movie in the reader’s mind.”—The Wall Street Journal

“The more you learn about Ben and his troubled upbringing, the more courageous the novel seems in exposing truths that most crime fiction doesn’t go near.”—Kirkus Reviews (starred review)

Praise For Shadow Man: A Novel…

“Excellent, atmospheric . . . [a] superb police procedural . . . [Ben Wade] is but one of many sharply etched characters who help make Shadow Man a stellar achievement, a book that unspools like a dark-toned movie in the reader’s mind.”—The Wall Street Journal

“The crime part of this novel is superbly done: Wade, along with forensic expert Natasha Betencourt, are both indelible characters, and the passages from the criminal’s perspective are chilling. Yet there is also a lot of complex emotion—a lot of novel, if you will—going on here, especially in the excavation of Wade’s past and in the tension between the remaining wildness and the parcels of civilization carved out of the valley.”—Literary Hub

“[Alan] Drew’s debut psychological thriller succeeds admirably. There are three hearts of human darkness within, and it is for the reader to decide which character is the true ‘shadow man’ . . . The Steinbeck-like passages about the vanishing cowboy landscape contribute to the novel’s power.”—Booklist (starred review)

“Drew’s cinematic descriptive powers, which he displayed so well in his debut, are on full and wonderful display [in Shadow Man], helping to make it an absolute must-read this summer. . . . Drew’s prose will remind readers by turns of Dennis Lehane and T. Jefferson Parker. This is a remarkable work that you will want to read in one sitting, simply because its author sinks the hook so deeply from its first paragraph that it is impossible to put down until completed.”—Bookreporter

“Entertaining, well-constructed . . . The darkness that affects [Ben] Wade, a lone wolf rides horses for pleasure, forms the heart of the story, and Drew draws it out nicely while still moving the plot forward.”—Publishers Weekly

“Recommend this one to fans of Michael Connelly, Tana French, and Dennis Lehane. . . . The Steinbeck-like passages about the vanishing cowboy landscape contribute to the novel’s power.”—Booklist (starred review)

“Wonderfully imagined and wonderfully written, Shadow Man is everything a great thriller should be. . . . A home run.”—Lee Child

“Shadow Man revises the old detective story and turns it in several fascinating directions. Alan Drew writes with precision, subtlety, and a streak of suspense that does not often color the literary novel.”—Colum McCann, author of Let the Great World Spin

Alan Drew is the author of the critically acclaimed debut novel Gardens of Water. He is a graduate of the Iowa Writers’ Workshop. An associate professor of English at Villanova University, where he directs the creative writing program, he lives near Philadelphia with his wife and two children.
Loading...
or
Not Currently Available for Direct Purchase