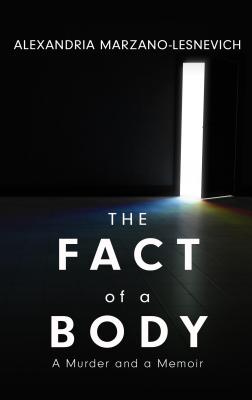 The Fact of a Body

A Murder and a Memoir

“Alexandria Marzano-Lesnevich didn't set out to investigate murder of six-year-old Jeremy Guillory in Louisiana; it was the case she happened upon as a young law school intern in 1992. In a fascinating twist, this becomes not only the true story of a heinous crime for which the perpetrator is in prison, but also of the investigation that unlocks the author's memories of her own youth, a childhood in which she and her sisters were repeatedly sexually abused by their maternal grandfather. As Marzano-Lesnevich moves backward and forward in time between the young man who killed Jeremy and her own life, the reader is swept along on a current of dismay and awe: dismay that human beings can do these things to each other, and awe that the author could face such demons and move on. I've never read another book like this.”
— Anne Holman (E), The King's English, Salt Lake City, UT
View the List

"This book is a marvel. The Fact of a Body is equal parts gripping and haunting and will leave you questioning whether any one story can hold the full truth." -- Celeste Ng, author of the New York Times bestselling Everything I Never Told You and Little Fires Everywhere

Before Alexandria Marzano-Lesnevich begins a summer job at a law firm in Louisiana, working to help defend men accused of murder, she thinks her position is clear. The child of two lawyers, she is staunchly anti-death penalty. But the moment convicted murderer Ricky Langley's face flashes on the screen as she reviews old tapes--the moment she hears him speak of his crimes -- she is overcome with the feeling of wanting him to die. Shocked by her reaction, she digs deeper and deeper into the case. Despite their vastly different circumstances, something in his story is unsettlingly, uncannily familiar.

Crime, even the darkest and most unsayable acts, can happen to any one of us. As Alexandria pores over the facts of the murder, she finds herself thrust into the complicated narrative of Ricky's childhood. And by examining the details of Ricky's case, she is forced to face her own story, to unearth long-buried family secrets, and reckon with a past that colors her view of Ricky's crime.

But another surprise awaits: She wasn't the only one who saw her life in Ricky's.

An intellectual and emotional thriller that is also a different kind of murder mystery, THE FACT OF A BODY is a book not only about how the story of one crime was constructed -- but about how we grapple with our own personal histories. Along the way it tackles questions about the nature of forgiveness, and if a single narrative can ever really contain something as definitive as the truth. This groundbreaking, heart-stopping work, ten years in the making, shows how the law is more personal than we would like to believe -- and the truth more complicated, and powerful, than we could ever imagine.

A 2014 National Endowment for the Arts fellow, she has received a Rona Jaffe Award and has twice been a fellow at both MacDowell and Yaddo. Her essays appear in the New York Times, Oxford American, and the anthologies TRUE CRIME and WAVEFORM: Twenty-first Century Essays by Women, as well as many other publications. She received her JD from Harvard, her MFA at Emerson College, and her BA from Columbia University. She now lives in Boston, where she teaches at Grub Street and in the graduate public policy program at Harvard's Kennedy School of Government.
Loading...
or
Not Currently Available for Direct Purchase