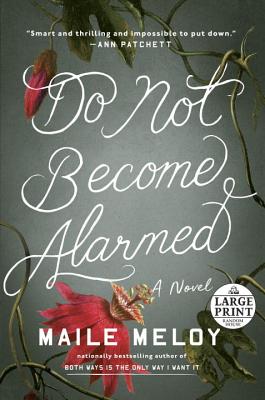 Do Not Become Alarmed

“All parents have had those moments when something happens and you think, 'This is it. The moment my life changes.' This is the story of two families that face the unimaginable: they lose their children in a foreign country. The tale alternates between characters, with each fully realized and fully drawn. Maile Meloy explores what happens to each family: the relationship between the wives, who are cousins and have been close since childhood, and between the children who are missing. The writing is incredible, and the story is such that you can't put it down. A satisfying read that makes you wonder about how you would react in the same situation.”
— Kym Havens (E), An Unlikely Story, Plainville, MA
View the List

The moving and suspenseful new novel that Ann Patchett calls "smart and thrilling and impossible to put down... the book that every reader longs for."


The sun is shining, the sea is blue, the children have disappeared.

When Liv and Nora decide to take their husbands and children on a holiday cruise, everyone is thrilled. The adults are lulled by the ship’s comfort and ease. The four children—ages six to eleven—love the nonstop buffet and their newfound independence. But when they all go ashore for an adventure in Central America, a series of minor misfortunes and miscalculations leads the families farther from the safety of the ship. One minute the children are there, and the next they’re gone.

The disintegration of the world the families knew—told from the perspectives of both the adults and the children—is both riveting and revealing. The parents, accustomed to security and control, turn on each other and blame themselves, while the seemingly helpless children discover resources they never knew they possessed.

Do Not Become Alarmed is a story about the protective force of innocence and the limits of parental power, and an insightful look at privileged illusions of safety. Celebrated for her spare and moving fiction, Maile Meloy has written a gripping novel about how quickly what we count on can fall away, and the way a crisis shifts our perceptions of what matters most.

Maile Meloy is the author of the novels Liars and Saints and A Family Daughter, the short-story collections Half in Love and Both Ways Is the Only Way I Want It (named one of the 10 Best Books of 2009 by The New York Times Book Review), and a bestselling middle-grade trilogy. Her fiction has won the Paris Review's Aga Khan Prize for Fiction, the PEN/Malamud Award, and the Rosenthal Award from the American Academy of Arts and Letters. The recipient of a Guggenheim Fellowship, Meloy was shortlisted for the UK's Orange Prize and chosen as one of Granta's Best Young American Novelists.
Loading...
or
Not Currently Available for Direct Purchase