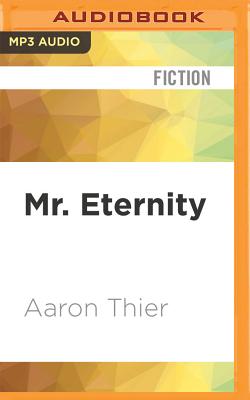 Aaron Thier, Coleen Marlo (Read by), David Marantz (Read by)

“Clever, smart, and brilliantly comic as it deals with our humanity, our resilient spirit, and the tremendous challenges that demand our cooperative attention, Mr. Eternity is a delight. Who can resist the tale of a 560-year-old American man named Daniel Defoe, who has much wisdom to offer the world and its people. This genre-bending page-turner is a blast to read!”
— Ed Conklin (M), Chaucer's Books, Santa Barbara, CA
View the List

Key West, 2016. Sea levels are rising, coral reefs are dying. In short, everything is going to hell. It's here that two young filmmakers find something to believe in: an old sailor who calls himself Daniel Defoe and claims to be 560 years old. In fact, old Dan is in the prime of his life - an incredible, perhaps eternal American life.

The story unfolds over the course of a millennium, picking up in the 16th century in the Viceroyalty of New Granada and continuing into the 26th, where, in the future Democratic Federation of Mississippi States, Dan serves as an advisor to the King of St. Louis. Some things remain constant throughout the centuries, and being on the edge of ruin may be one.

In 1560, the Spaniards have destroyed the Aztec and Inca civilizations. In 2500, we've destroyed our own: the cities of the Atlantic coast are underwater, the union has fallen apart, and cars, plastics, and air conditioning are relegated to history. But there are other constants too: love, humor, and old Dan himself, always adapting and inspiring others with dreams of a better life.

An ingenious, hilarious, and captivating audiobook, Mr. Eternity is multiple stories in one. Together they form an uncommon work - about our changing planet and its remarkable continuities.