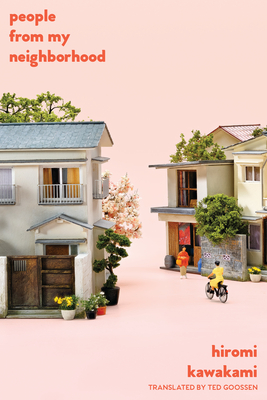 People from My Neighborhood

From the author of the internationally bestselling Strange Weather in Tokyo, a collection of interlinking stories that masterfully blend the mundane and the mythical—"fairy tales in the best Brothers Grimm tradition: naïf, magical, and frequently veering into the macabre" (Financial Times).

A bossy child who lives under a white cloth near a tree; a schoolgirl who keeps doll's brains in a desk drawer; an old man with two shadows, one docile and one rebellious; a diplomat no one has ever seen who goes fishing at an artificial lake no one has ever heard of. These are some of the inhabitants of People from My Neighborhood.

In their lives, details of the local and everyday—the lunch menu at a tiny drinking place called the Love, the color and shape of the roof of the tax office—slip into accounts of duels, prophetic dreams, revolutions, and visitations from ghosts and gods. In twenty-six "palm of the hand" stories—fictions small enough to fit in the palm of one's hand and brief enough to allow for dipping in and out—Hiromi Kawakami creates a universe ruled by mystery and transformation.

Praise For People from My Neighborhood: Stories…

“Beguiling, with a strangeness that feels culturally rooted.” —Sunday Times

“Offers a delicious combination of intrigue, magic and comedy, like an unusual but satisfying snack. Kawakami continues to show off her prowess as a sharp-witted writer with a keen eye for the unexplored mysteries of humanity.” —Japan Times

“Tempting as it is, People from My Neighborhood is not a book to rush . . . The interlinking short stories in this collection are fairy tales in the best Brothers Grimm tradition: naïf, magical and frequently veering into the macabre . . . in a world where much is insubstantial . . . Kawakami's clean narrative style is very much her own.” —Financial Times

“It would be fair to describe the stories as surreal. But as the pages slid by, I found myself thinking . . . how could I talk about my neighbours without this level of surrealism? I know so little about who they really are. I see their lives in flashes, out of context, on guard and on display. They are the perfect subject for the genre. And what’s more, when I was a child, didn’t I imagine them as caricatures—witches, old men, seers, rebels, charlatans? It’s as though People from My Neighborhood reminds us of how we once perceived the world.” —The Arts Desk

"No one writes like Hiromi Kawakami. In People from My Neighborhood, Kawakami reminds us of what a gift and a rarity it is to read her work. Her characters love, lose, grow, and fall, while Kawakami paints murals of their lives with the deftest of hands. The depth and complexity of these stories is simply beyond, and Kawakami's prose, from cover to cover, couldn't be a bigger joy to live with. It will always be a mystery to me how she pulled it off, but People From My Neighborhood is a world unto itself—and we couldn't be luckier to get to read it." —Bryan Washington, author of Memorial and Lot

Hiromi Kawakami was born in Tokyo in 1958. Her first novel, Kamisama (God), was published in 1994. In 1996, she was awarded the Akutagawa Prize for Hebi o Fumu (Tread on a Snake) and in 2001 she won the Tanizaki Prize for her novel Sensei no Kaban (Strange Weather in Tokyo), which became an international bestseller. Strange Weather in Tokyo was shortlisted for the 2013 Man Asian Literary Prize and the 2014 International Foreign Fiction Prize. Kawakami has contributed to editions of Granta in both the UK and Japan and is one of Japan's most popular contemporary novelists.
Loading...
or
Not Currently Available for Direct Purchase