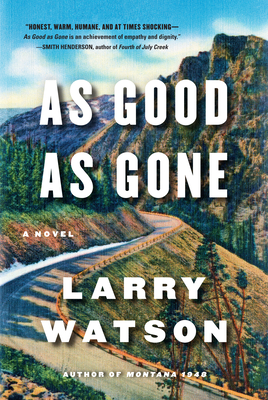 As Good as Gone

“After the death of his wife, Cal Sidey abandoned his children for the life of a solitary ranch hand in Montana. Years later, in 1963, his son Bill asks his father to return home to look after his grandchildren, while Bill tends to a family emergency. The powerful story of Cal's visit is a tragedy of narrowly missed moments as he attempts reentry into a world that no longer has any place for his old-fashioned and violent ways. The prose is clear and lovely, every character is strongly drawn, and Cal Sidey captured my heart while breaking it. Watson has given us a grand Western tragedy, spare and harrowing.”
— Kathi Kirby (E), Powell's Books, Inc, Portland, OR
View the List

“Honest, warm, humane, and at times shocking, As Good as Gone is an achievement of empathy and dignity.” —Smith Henderson, author of Fourth of July Creek

Calvin Sidey is always ready to run, and it doesn’t take much to set him in motion. As a young man, he ran from this block, from Gladstone, from Montana, from this country. From his family and the family business. He ran from sadness, and he ran from responsibility. If the gossip was true, he ran from the law.

It’s 1963, and Calvin Sidey, one of the last of the old cowboys, has long ago left his family to live a life of self-reliance out on the prairie. He’s been a mostly absentee father and grandfather until his estranged son asks him to stay with his grandchildren, Ann and Will, for a week while he and his wife are away. So Calvin agrees to return to the small town where he once was a mythic figure, to the very home he once abandoned.

But trouble soon comes to the door when a boy’s attentions to seventeen-year-old Ann become increasingly aggressive and a group of reckless kids portend danger for eleven-year-old Will. Calvin knows only one way to solve problems: the Old West way, in which scores are settled and ultimatums are issued and your gun is always loaded. And though he has a powerful effect on those around him--from the widowed neighbor who has fallen under his spell to Ann and Will, who see him as the man who brings a sudden and violent order to their lives--in the changing culture of the 1960s, Calvin isn’t just a relic; he’s a wild card, a danger to himself and those who love him.

In As Good as Gone, Larry Watson captures our longing for the Old West and its heroes, and he challenges our understanding of loyalty and justice. Both tough and tender, it is a stunning achievement.

Praise For As Good as Gone: A Novel…

“[A] remarkable novel. It is like watching the sunrises over the prairies of Montana about which Watson writes so eloquently. But as with the reward of the lavender‑ and golden‑hued sky to come, the ultimate effect of this novel is well worth the time spent watching.” —New York Journal of Books

“A satisfying drama . . . It’s typical of this thoughtful novelist that the ending of As Good as Gone is nuanced rather than explosive, and its traces of heroism are found not in violence but in a show of restraint.” —The Wall Street Journal

“Watson evokes Big Sky Country as well as Montana writing legends like Ivan Doig, Jim Harrison and Norman Maclean. And like those authors, Watson is a naturally gifted storyteller, plainspoken and unpretentious. Watson is excellent at building suspense, and As Good as Gone is frequently exciting in a cinematic sense. (Just try not picturing Sam Elliott as Calvin Sidey.)” —NPR.org

“In the virile, enigmatic character of Calvin, Watson both indulges in and reworks the romantic myth of the American cowboy in ways reminiscent of Edward Abbey’s The Brave Cowboy or Larry McMurtry’s Horseman, Pass By . . . A master of spare, economical storytelling, Watson sweeps us up in a captivating family drama.” —The Seattle Times

“[A] stunning novel . . . Having received numerous awards for his fiction, Watson (Montana 1948) is sure to win more praise for his powerful characterizations in the manner of Kent Haruf and Ivan Doig. Readers won’t get a novel any better than this.” —Library Journal (starred review)

“An excellent family drama . . . This is a very well done novel in which every character faces an individual conflict, resulting in a rich, suspenseful read.” —Publishers Weekly

Raised in Bismarck, North Dakota, Larry Watson is the author of ten critically acclaimed books, including the bestselling Montana 1948. His fiction has been published internationally and has received numerous prizes and awards. His essays and book reviews have appeared in the Los Angeles Times, the Washington Post, the Chicago Sun-Times, the Milwaukee Journal Sentinel, and other periodicals. He and his wife live in Kenosha, Wisconsin. A film adaptation of Watson’s novel Let Him Go is currently in production with Kevin Costner and Diane Lane and due to release in 2020.
Loading...
or support indie stores by buying on