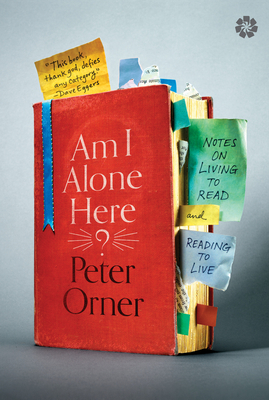 Am I Alone Here?

Notes on Living to Read and Reading to Live

“From beloved novelist and short-story writer Peter Orner comes a collection of essays on the reading life. Orner considers Chekhov in a hospital cafeteria, Welty on a remote island. He also throws Julian Barnes out the window of a moving car - after all, who would trust a man who only talked about what he loved? Behind and around and between these meditations flit the ghosts of the author's life: his late father, his lost marriage, his self-deprecating take on his own career. The result is a book overflowing with charm - wry, delectable, and laugh-out-loud funny. Orner is a writer's writer, but he is also a reader's reader. Am I Alone Here? is an absolute treasure.”
— Mairead Stead (M), Literati Bookstore, Ann Arbor, MI
View the List

This National Book Critics Circle Award is "an entrancing attempt to catch what falls between: the irreducibly personal, messy, even embarrassing ways reading and living bleed into each other, which neither literary criticism nor autobiography ever quite acknowledges." --The New York Times "Stories, both my own and those I've taken to heart, make up whoever it is that I've become," Peter Orner writes in this collection of essays about reading, writing, and living. Orner reads and writes everywhere he finds himself: a hospital cafeteria, a coffee shop in Albania, or a crowded bus in Haiti. The result is a book of unlearned meditations that stumbles into memoir. Among the many writers Orner addresses are Isaac Babel and Zora Neale Hurston, both of whom told their truths and were silenced; Franz Kafka, who professed loneliness but craved connection; Robert Walser, who spent the last twenty-three years of his life in a Swiss insane asylum, working at being crazy; and Juan Rulfo, who practiced the difficult art of silence. Virginia Woolf, Eudora Welty, Yasunari Kawabata, Saul Bellow, Mavis Gallant, John Edgar Wideman, William Trevor, and Václav Havel make appearances, as well as the poet Herbert Morris--about whom almost nothing is known. An elegy for an eccentric late father, and the end of a marriage, Am I Alone Here? is also a celebration of the possibility of renewal. At once personal and panoramic, this book will inspire readers to return to the essential stories of their own lives.

Peter Orner is the author of two novels, Love and Shame and Love and The Second Coming of Mavala Shikongo, and two story collections, Last Car Over the Sagamore Bridge and Esther Stories. His work has appeared in The New York Times, The Atlantic, The Paris Review, and Best American Stories. A recipient of Guggenheim and Lannan Foundation Fellowships, as well as a Fulbright to Namibia, Orner has taught at the Iowa Writers' Workshop, the University of Montana, Northwestern, and the Warren Wilson MFA Program for Writers. He is currently on the faculty of San Francisco State University and a member of the Bolinas Volunteer Fire Department.
Loading...
or support indie stores by buying on